It’s that time of year where I begin preparing for the fall.  Yes, I do realize that summer has not yet officially begun.  But this is the moment it all begins.

I watch the squirrels and act accordingly.

They are scurrying about in the morning and evening but are not so active in the heat of the day.  I too scurry about in the wee hours of the morning.  Not so much in the afternoon.  In fact, without a coffee boost around 2 I will frequently have trouble keeping my eyes open.  But I am the worlds worst napper.  I wake up EVIL.

So, what am I doing to prepare for fall and the winter to follow?

I am weeding daily to ensure the best possible harvest.  I water plants in danger.  I tend to my pastures as well.  Thistle is not welcome.  Nor are burrs.  As a wool producer, both weeds are completely unacceptable.

I have an abundance of several herbs this year.  The mild winter last year is the reason.  I have had the 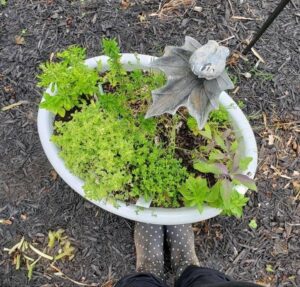 dehydrator full of things that I have previously bought.  That is a great feeling and being wasteful seems to be so wrong to my soul.

This morning I gathered the third batch of lavender.  I also collected two trays full of oregano and one of thyme.  I am beyond grateful for these gifts that required little effort on my part.

There are other preparations underway.

I have three baskets full of wool to be spun.  The Tour de France has been postponed and so too has the Tour de Fleece.  I have decided to host the Tour de Fleece during the original dates as well as the rescheduled dates.  I have plenty of wool to spin and more growing in those pastures in mentioned.  Last years clip is almost ready to head to the mill.  Go ahead and move the dates  of the Tour again I say.  I’ll be ready.

I am also preparing my barn for the fall.  Soon enough the second cutting of hay will be ready and the barn will fill with food for the flock for the winter months.  The hay mound has been repositioned to make the stacking of hay a much more logical event and hopefully take less time with a clean level surface to begin stacking atop.  My kids took care of this task for me.

You see, making preparations doesn’t need to mean you do everything yourself.  It can also mean assigning the tasks to someone else.  I have learned as I’ve aged that asking for help doesn’t signal a weakness, it signals a strength.  It takes a lot more strength for me to ask for help than it does for me to do the jobs myself.  The recovery period after asking for help is much shorter however, than when I stubbornly overdo things.

Don’t be afraid to ask for assistance.  Whether physical or mental.  It’s all OK.

How are you preparing for the fall?